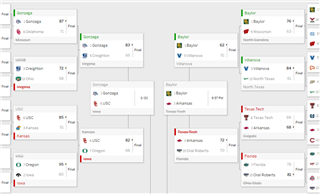 3/29/2021
The Dads Club NCAA Men's Basketball bracket tourney contest has reached the halfway point. Where are you ranked and what do you need in order to win?
With three rounds in the books and three rounds to go, eight of our 18 players are eliminated from contention, but more than half of those who entered can still win. Below are the standings and what each player needs to have happen in order to win.

Update: Things have changed a lot with the Final Four now set. Below are the current scenarios needed to win by the only three players still able to:
vinnylion 1: Baylor beats Houston and loses in the Finals.
scottbergen: Houston beats Baylor
FiFiRoyals: Baylor wins the championship
Back