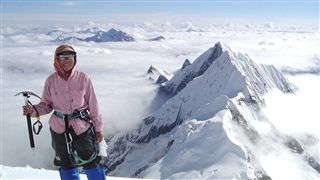 3/25/2021
Nicki Ham
In celebration of Women’s History Month, Louisville High School Athletics would like to share some historical facts about influential women who have made a footprint in sports history. This week's spotlight is on mountain climber Junko Tabei.
Tabei was the first woman to climb both Mount Everest and the Seven Summits, the highest peaks on each continent.

Junko Tabei was born on September 22, 1939, in Miharu, Japan, the fifth of seven children. Growing up, Tabei was described as a frail child but found a passion for climbing at only ten years old. Her family could not afford to have her climb on a regular basis, but during her high school years, she was able to participate in a few climbs.

It was not until after she graduated Showa Women’s University in 1962 that she start climbing more seriously on a regular basis by joining many men’s climbing clubs. Though some clubs were
welcoming, others were put off by her desire to participate in such a male-dominated, dangerous
sport. During her participation with the men’s clubs, Tabei continued to follow her passion and
climbed all of the major mountains in Japan, including Mount Fuji.
Wanting more women to enjoy the passion of climbing without experiencing the negative
criticism of the men’s climbing clubs, Tabei started her own mountaineering club in 1969 - the first all-women's climbing club in Japan. They called themselves the Joshi-Tohan Club, with the motto “Let’s go on an overseas expedition by ourselves."

In 1970, the Joshi-Tohan Club set off on their first expedition to the Nepalese mountain Annapurana III. This
was the first time women had reached the top of Annapurna III. The climb was a monumental win for women climbers and also provided a bond between the members of the team. Climbing is a team sport and requires accepting help when one has reached his or her personal limitation. The club built trust in one another and became a true team that helped push each other to finish what they started.

After the Annapurna III expedition, the club decided to summit Mount Everest. The team applied
in 1971, but due to the formal climbing schedule, it took four years to finally start their
expedition. During that period Tabei searched to find a sponsor to help fund the expedition. She
was turned down time and time again by chauvinistic individuals who did not see climbing as a sport for women.

That didn’t stop Tabei, she finally landed funding from the Yomiuri Shimbun newspaper and Nippon television. Though these sponsors provided a large amount of money, the team was still short of their fundraising needs by $5,000. Dedicated to her team and with a goal in mind, Tabei was able to fund the remaining amount herself by teaching piano and cutting costs by hand-making some of their equipment.
In May of 1975 after four long years of waiting and countless obstacles, the team was ready to
summit Mount Everest. This journey did not go unrecognized; a journalist and film crew documented the start of their expedition. Shortly after the climb started, the team was faced with a catastrophic setback.

Their camp was hit by an avalanche, burying Tabei and four other teammates in the snow. Sherpa guides were able to save the women, but Tabei was injured in the incident. She was able to recover after two
days of rest and the team continued up the mountain.

As they continued on, they discovered that there would only be enough oxygen left for one woman to continue to the summit of Everest. With much discussion, the team decided that Tabei should be the one to finish the climb.

Almost there, and after so much physical and mental anguish, Tabei was met with one final great challenge. She had to cross a slim, hazardous rim of ice that she described as one of the tensest experiences she had ever faced. Through countless physical and mental obstacles, Junko Tabei became the first woman to summit Mount Everest on May 16, 1975.

Junko Tabei proceeded to achieve many more milestones. She became the first woman to complete the Seven Summits Challenge and climbed 70 percent of the world's highest mountains. Tabei has also published seven books between 1996 and 2008.
Tabei was diagnosed with stomach cancer in 2012, but that diagnosis did not stop her from continuing her adventures until she passed away on October 20, 2016. Before her death, Tebei was honored by having an asteroid named after her, 6897 Tabei. Additionally, on November 19, 2019 one of Pluto’s mountain ranges was named Tabei Montes,

We celebrate Junko Tabei for breaking barriers and providing women with the ability to pursue their dreams no matter the hurdles they face.

“Technique and ability alone do not get you to the top; it is the willpower that is the most important.”
-Junko Tabei
Back