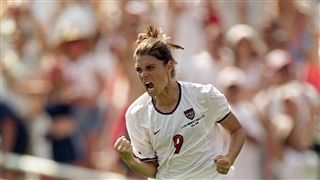 3/18/2021
Nicki Ham
In celebration of Women’s History Month, Louisville High School Athletics would like to share some historical facts about influential women who have made a footprint in sports history. This week's spotlight is on American soccer legend Mia Hamm.
Mariel (Mia) Margaret Hamm one of the most well-known and beloved female soccer athletes of all time. Hamm was born in Selma, Alabama March 17, 1972, the fourth of six children. She was born with a birth defect known as “clubfoot,” but was able to overcome her deformation with corrective shoes. As a child, Hamm’s family moved around frequently due to her father being in the Air Force. They lived on many Air Force bases around the world including Florence, Italy; it was here Hamm was first exposed to soccer.

After her family moved back to the United States, Hamm joined her first soccer team in Wichita Falls, Texas. In Junior High, she participated in many sports including both soccer and football, but as she progressed to high school, she decided to specialize in soccer.

Hamm was only 15 when she qualified for the 1987 U.S. Olympic Festival, playing on the United States Women’s National Soccer Team. Moving on to college, Hamm played for the University of North Carolina at Chapel Hill from 1989 to 1993. She led the Tar Heels to four NCAA Division 1 Women’s Soccer Championships, and earned a three year run as the Atlantic Coast Conference (ACC) player of the year, and
was named ACC Female Athlete of the Year twice.

“My coach said I ran like a girl, I said if he could run a little faster he could too.”
-Mia Hamm
Back