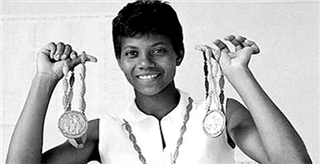 3/11/2021
Nicki Ham
In celebration of Women’s History Month, Louisville High School Athletics would like to share some historical facts about influential women who have made a footprint in sports history. This week's spotlight is on American track & field athlete Wilma Rudolph.
Rudolph is an inspirational female athlete who overcame many obstacles in her life. Rudolph was born June 23, 1940, in Saint Bethlehem, Tennessee. She was the 20th child of 22, and was born prematurely, weighing only 4.5 pounds. Growing up, Rudolph had many health complications ranging from pneumonia, scarlet fever, and polio. At a young age, Rudolph was told by her doctor that she would never walk again, but with the help of her mother and family, Rudolph was able to completely recover and overcome her many illnesses.

Rudolph participated in basketball and track 7 field in high school and displayed her talents as a natural athlete. Rudolph was a phenomenal basketball player and was named an All-American. She proceeded to Tennessee State University, where she decided to dedicate herself to track and field. With the guidance of her coach, Ed Temple, she participated in countless races throughout her college career. Rudolph graduated from TSU in 1963, with a bachelor’s degree in education.

Rudolph competed in two Olympics Games. At the young age of 16, she competed in the 1956 Melbourne/ Stockholm Olympics where she won a bronze medal in the 4x100m relay. She then returned in the 1960 Rome Olympics, and became the first American woman to win three gold medals in track and field at the same Olympic game.

Rudolph’s performance earned her multiple titles and awards. She is known as “the fastest woman in the world”, and has received the National Collegiate Athletic Association’s Silver Anniversary Award. Tennessee State University named their indoor track and dormitory in her name.

After retiring from track & field, Rudolph committed herself to many different jobs including high school coach, elementary school teacher, and finally ending her career at the DePauw University as the director for Women’s Track. Rudolph also published an autobiography in 1977 called, Wilma: The Story of Wilma Rudolph.

We hope you enjoyed a look into one of the many influential women in sports we will be exploring within the month of March!