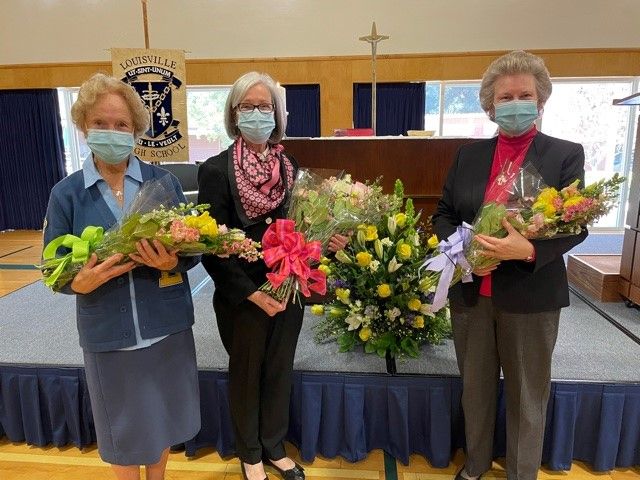 1/29/2021
The Louisville community came together to celebrate our history at the Heritage Liturgy on Tuesday, February 2nd. The Heritage Liturgy is a long-standing and beloved tradition at Louisville.
The Mass typically includes a special reflection following Communion by one of our Sisters of St. Louis in which she offers a perspective on our school's history and on their own part in that journey. She finishes the reflection by reciting a quote taken from the archives, and usually written by one of our founders. This quotation is traditionally printed on cards and given to the seniors along with a small fleur de lis charm as their names are read aloud.

The Heritage Liturgy looked a little different this year. Fr. Steve Davoren celebrated virtually, of course, but additionally, instead of one of the sisters offering a reflection, that honor was given to principal Kathy Vercillo. With all of her years of distinguished service at Louisville, Mrs. Vercillo is uniquely qualified to reflect on the school's history.

The quotation around which Mrs. Vercillo centered her reflection was from Abbe Louis Bautain, who said, "Not new things, but in a new way." Her moving talk highlighted some of the great and good things Louisville girls have done this school year while working remotely, and how these things are not new to our community but are being done in a new way.

The names of our seniors were then read aloud at the end of Mass, as they normally are, and bouquets of flowers were presented to Mrs. Vercillo, Sr. Donna, and Sr. Marie as a tribute to their individual contributions and to the general contributions of the Sisters of St. Louis throughout Louisville's first 60 years.

The members of the Class of '21 will receive their quotation cards in the mail.

The Mass is available to view online in its entirety. Fr. Steve Davoren's poignant homily begins at 15:55, and Mrs. Vercillo's reflection begins at 38:54.

“I look back on the years now and remember them as adventurous times of hard and challenging work, tinged with many nostalgic moments, but filled with true happiness and joy.
…the world does not often see the silent preaching of the gospel that goes on in the classroom, nor is it aware of the shaping, molding and transforming process that takes place in the minds of the children as they are led gently along the Christian way of truth.  But the angels of God see it and rejoice.
I believe it was the vision of hope for the future, animated by encouragement from the Sisters that inspired me to move forward with confidence in God and an openness toward the new horizons of the future.
…we believed in the miracle, and as the new school opened its doors to ninety freshmen on September 12, 1960, we watched the launching of Louisville High School.”
Back